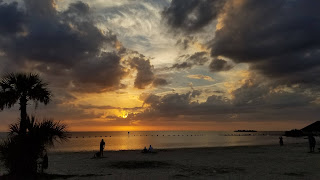 Over the last few months we have visited several Florida beaches. First we went to Daytona Beach on the Atlantic coast, and loved it. It was the middle of November, yet the water temperatures were fine and I was surprised how nice it was for being so late in the year. Then we tried Clearwater Beach on the Gulf coast. We were surprised at how nice the sand was, but near the water it was more broken shells than sand and so not quite as nice as Daytona Beach. Also the waves at Daytona Beach were a lot more fun to play. At least so far, and it makes sense, the waves on the Atlantic beaches are much bigger than on the Gulf beaches.

Then in January we tried out Cocoa Beach. My son in law gave me some pointers on body surfing and we had a blast surfing the waves. By the end of the day I actually got to where I could ride the waves pretty well. 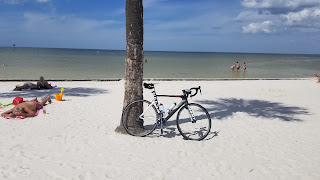 A few weeks ago I decided to get up early in the morning and bike from Clermont Florida to Pine Island Park beach and then meet my daughter and family would drive out and we could have a fun day at the beach.

The problem is there isn't enough parking at the park so if you don't get there early you can't park. So after stopping to get a picture I headed north for Crystal River, and my daughter picked me up somewhere along the highway between Pine Island and Crystal River. Anyway we ended up going to Fort Island beach. 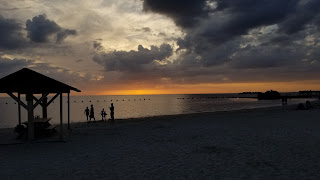 Fort Island beach was a great little beach for kids. It is well protected so there isn't much in the way of waves. Also while we were there a pod of dolphins came near the beach and played around for awhile. We stayed for sunset and I just had to get some pictures.

And then today we headed out to go to Fort De Soto Park beach. But we didn't bring any cash with us so we couldn't go over the toll bridges to get to the park and decided to go to St. Pete beach instead. We had a blast there. The sand was super soft and fine. And while the water felt a bit cold when you first step into it, after you get used to it, it is just fine.

So out of the beaches we visited so far, which is the best? Hmm, hard to say. I guess so far every Florida beach we've been to so far has been great.