That was the worst bike ride I have ever gone on. It started out OK, cool but not too bad. I figured as the day went on it would get warmer so I didn't want to over dress. I just had two shirts and my biking shorts and long pants.

We headed at a pace in the upper teens. Until we got to Five Mile Pass we seemed to be doing fine with a bit of a cross wind. Once over the pass and out towards Faust the cross wind became quite strong. It was a bit of a pain but bearable. However we knew it was going to be bad after Faust when we would turn North, and sure enough the section from Faust to Rush Valley was terrible. We had a nice steady 20 mph head wind and we were struggling to keep a 13 mph pace.

It was a relief when we finally got to Rush Valley and could again ride with a cross wind. Then we started climbing to the pass towards Dugway. This was the best part of the ride as the canyon blocked most of the wind. After getting to the top we waited for a while for Mike to get to the top. Eventually we figured something must be wrong and started back down. We found Mike 1/4 of the way down fixing a flat. After getting back to Rush Valley we had to again turn into the wind and get to the north most part of the loop.

Finally we got to turn Southeast. I figured this would be the fun easy part, but I was wrong. Now we were closer to the Oquirrh Mountains which killed a lot of the wind. Not only that but now we were going up a nice looooong climb. It was way to early for my legs to be giving out, but they were. We continued slowly up the hill and then had a nice section of down and up hills with a tail wind.

By the time we got back to Five Mile Pass my legs were completely spent, but for some reason I lead the paceline down the hill towards Fairfield. I tried to keep a good pace going down and lead most of the way down the hill. A little before Fairfield I moved to the back of the paceline and then a little further I dropped back. The rest of the ride back home I just didn't have any strength and I was feeling quite cold. It sure was nice to get home, off the bike, and out of the cold wind.
Posted by Dpburton at 4:29 PM No comments:

The long anticipated layoffs at Novell have finally happened. A lot of good people were let go. With all this it was a given that no work was going to get done today, so they told us to take the rest of the day off. 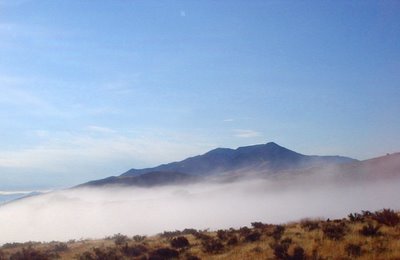 We decided that it would be good to go for a long bike ride and get our minds off of everything. So we started at the mouth of Provo Canyon, went up to Canyon Glen, then up the Great Western trail and down Dry Canyon and back to Canyon Glen. Then we headed back up to Bridal Vail Falls and headed South on the Shoreline trail. It was a lot of fun and ended up being a great way to get over the events of the day.

To those that got blue folders, good luck and I hope you find an even better job.
Posted by Dpburton at 8:05 PM No comments: