On the road again

Well, I'm just about to head out. My biggest concern? Water. There is a lot of emptiness on this route, and unlike Antarctica you can't just scoop up the "ground" you are biking over and heat it up to get water. Weather today is suppose to be warm and then a cold front moves in and the rest of the trip could be rainy and cold, and possibly snow.
Posted by Dpburton at 8:16 AM No comments:

There is a swagman bike rack waiting for me in Newport Oregon....

My prior attempt to bike from Eagle Mountain Utah to Newport Oregon failed. I had a very limited time available for the ride. To do it I needed to get about 160 miles a day, so I picked my nice light road bike. Unfortunately I got trapped in a snow storm and with a foot of snow on the ground the skinny road bike tires just were not safe.

Well I now have a bigger window to do the trip. This means this time I can use my mountain bike and camp along the way.

I like my new route. Now I can take dirt roads instead of having to do sections on the freeway. Here is my planned route for the Brigham City to Newport section. From Lehi to Ogden I will go on the Frontrunner train, and then I will just go up the main highway from Ogden to Brigham City.

Assuming I get the income taxes filed to day, I should be ready to start early tomorrow morning.

You think I would know better

When you put your bikes on the back of a car you need to make sure that the exhaust from the car does not hit the tires of the bike. It is something I am well aware of, however today I fell victim to the problem. 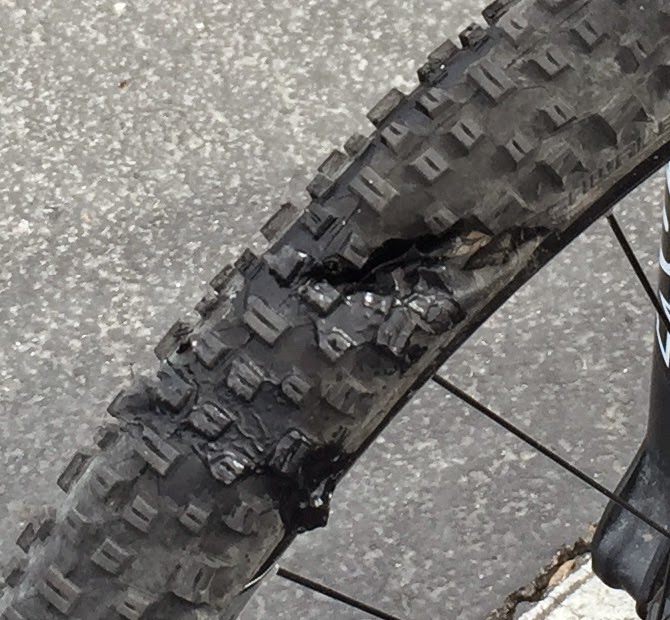 I am giving a presentation in St George tomorrow. Of course if I am going to go all the way to St George then I am taking my mountain biking and getting some good riding in. When we got here and went to take the bikes off the rack my front tire was a melted mess. I'm pretty upset with myself for this as now I will have to sell a lot of books just to break even on the trip.

After a trip to Red Rock Bicycle we finally were able to get a ride in. Took the Bear Claw Poppy trial out to Stucki Springs and then we followed a couple of women back down a trail they called the Snake Pit. Great ride but Kendall is a bit sore from his crash.
Posted by Dpburton at 10:02 PM No comments:

Cougar on the trail

Took my daughter and soon to be son-in-law out on the Hidden Hollow trails. The Deadwood trail is coming along great, and they loved it so much we had to loop up and do it again.

While headed down the trail, Cougar went flying past me. Don't worry, Cougar is a guys name, and not a large golden and white (nor black and blue) cat. By the looks of it, Cougar was after the Strava KOM, and looking at Strava afterwards, he got it.
Posted by Dpburton at 1:18 PM No comments:

We just want the rabbit

Yesterday I posted clips of the Hidden Valley trails. The whole ride would be too long and boring as a video so I chopped it up. Well, today I rode the Jackrabbit trail a bit faster so that it could be filmed. So here is the full Jackrabbit trail.

I just love to ride my bike.
Posted by Dpburton at 8:57 PM No comments:

Eagle Mountain is getting quite the network of mountain biking trails. It seems that most only know of the bike park and the Flintstones trail. But we have been building a lot of other trails.
This October the High School Mountain Biking League is planning on having a race in Eagle Mountain. So we have been working hard on building new trails that can be used for the race. Here is a video sample of the trails.


Jake joked about naming all the trails after us. So even though he named one of the new trails the Jackrabbit trail, I am calling it the Jake Rabbit trail.
Posted by Dpburton at 10:06 PM No comments:

Helped Jake finish marking the deadwood trail. This is the second half of the route the Utah High School Mountain Biking league will be using for a race in October. The whole route should be ridable next week.

I really like what the Utah High School Mountain Biking teams are doing. It is a great sport that is open to all the kids. And nobody sits on the sideline. Too bad Alpine School District doesn't support it.
Posted by Dpburton at 8:12 AM No comments:

Posted by Dpburton at 7:41 AM No comments:

I decided to finally get a phone and join the modern world. For years I have been using an iPod touch for music and internet. So I headed down to T-Mobile to get a new iPhone 6. Oh man! All they stock is the 16g version. No way that will work for me. I wasn't happy, but I finally settled for an Galaxy S5. My daughter is now offering to trade her iPhone 5s for my S5. Should I do it?

What else am I missing? Post your opinions.
Posted by Dpburton at 6:30 AM 2 comments:

Well, I had to abort my trip to Newport. Yesterday I made it up to I84 but the jacket I thought would be water proof wasn't so I was soaked. It was snowing pretty hard and an ambulence went past to take care of an accident on the freeway. The only paved route was to bike on the freeway, and with the weather it just seemed the best thing to do was to stop there. Fortunately I have great relatives in Tremonton. But unfortunately having them pick me up put me back half a days travel.

So this morning I was in the heart of the big snow storm, and figured the best thing was to go back home and try again in a couple of weeks. 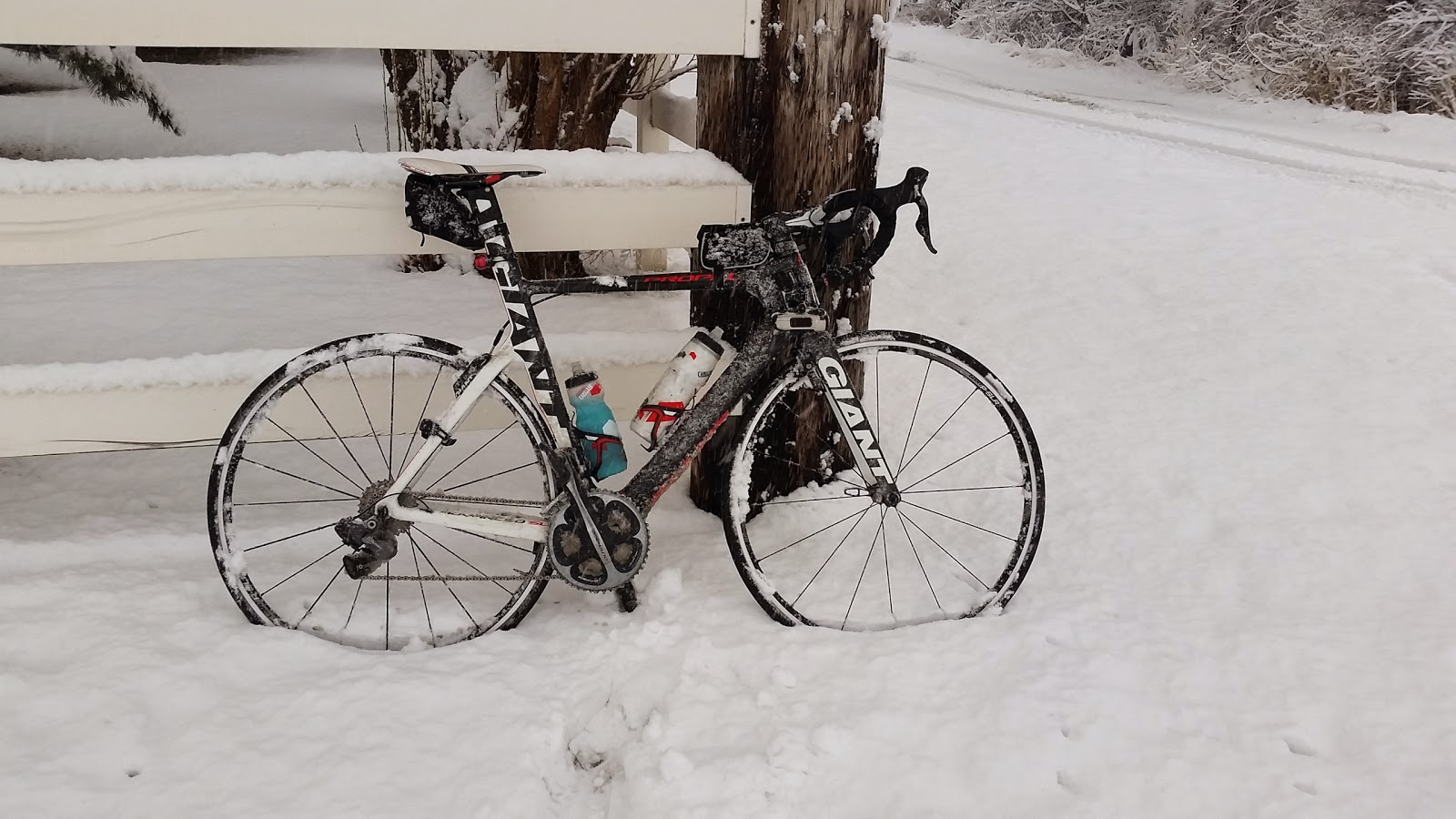 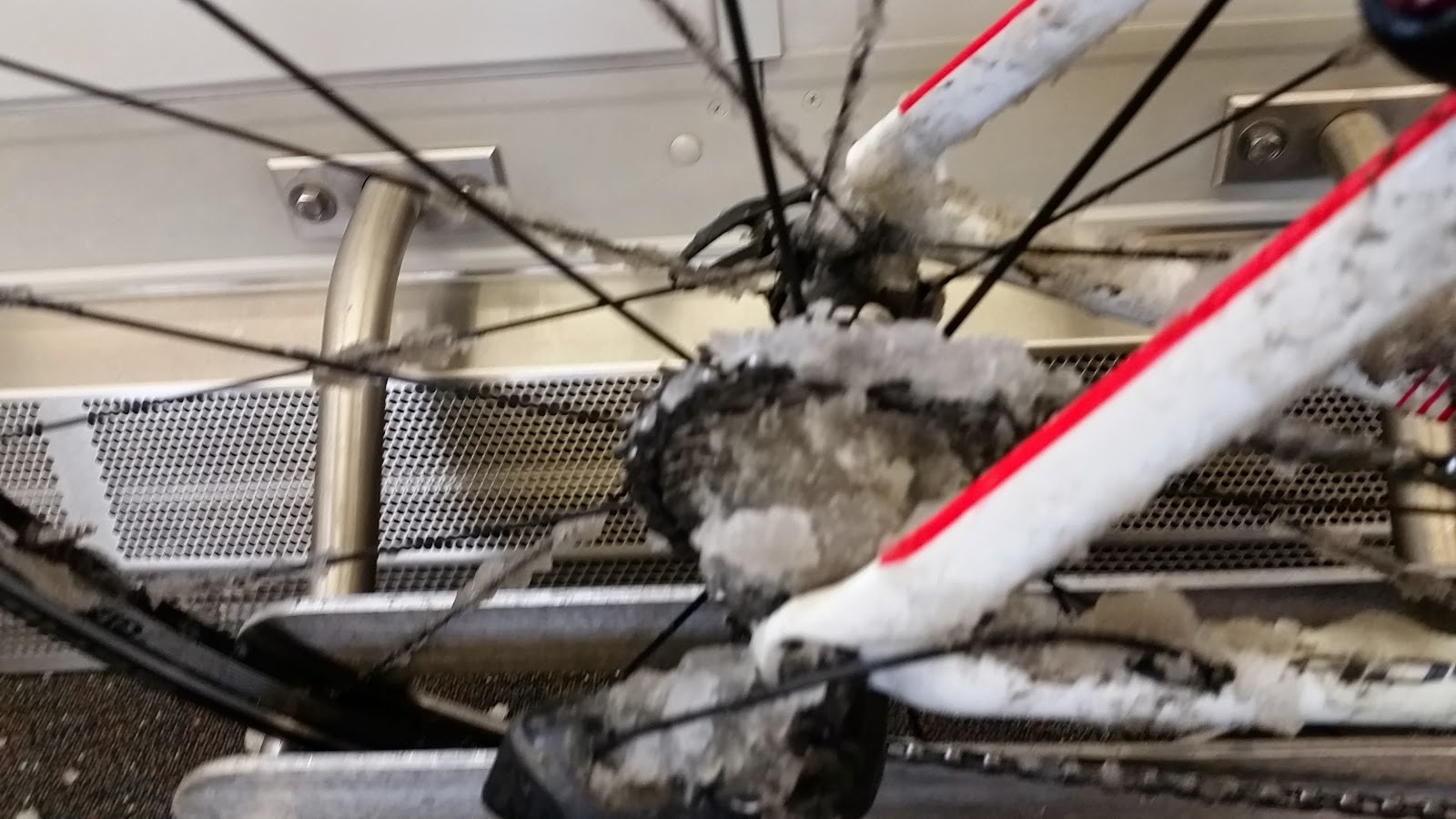 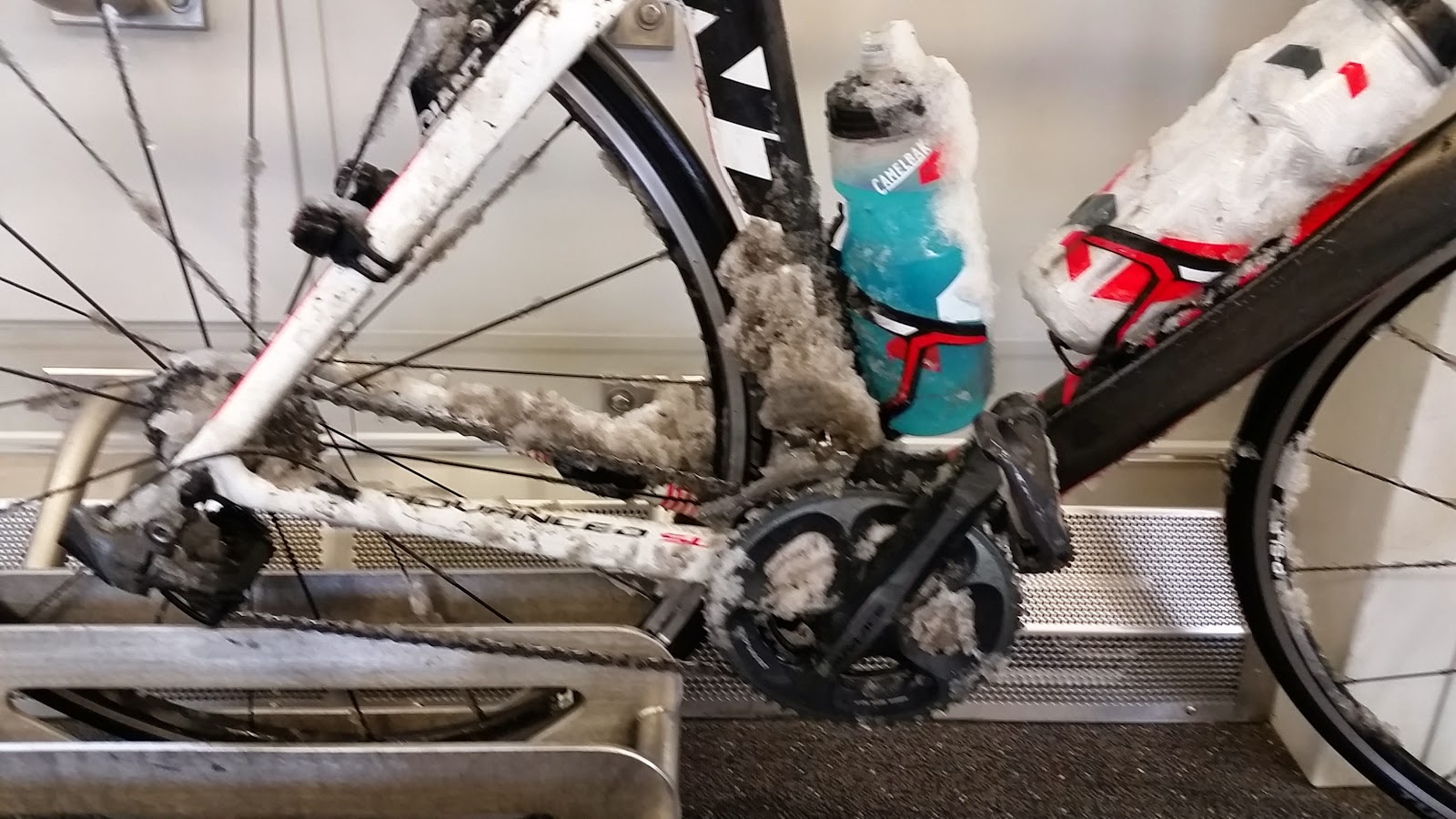 Today's ride started in Brigham city. It was snowing hard with several inches of snow on the roads.

I really am a big chicken. I get scared going more than 50 mph down a hill on the bike. So, today going down a hill at over 20 mph with icy roads and skinny tires while trucks were spraying me with slush, was quite spooky.

By the time I made it to Ogden only one gear in the rear was usable. The rest were filled with ice. It is nice to be home, but now I need to start a new plan for getting to Newport. I think this time I'll plan on a tent and more days.
Posted by Dpburton at 10:22 PM No comments:

The day started out with rain and snow,  but the weather forecast looked like it would be better up north. I took the train to Ogden. My plan was to catch the train that arrives as the 7 am but I slept in and so I was an 2 hours late getting started.

The ride to Brigham city went well, then I turned west too soon and ended up wasting twenty miles biking around the bird refuge. Now I was over four hours behind schedule and moving slow.

After getting back on track it started raining. I waited too long before stopping and putting rain gear on. By the time I made it too the rocket display I was soaked and the rain was turning to snow.

I finally made it to I 84 and it was getting late. So I gave in and let a relative come and rescue me.

There is now a fair amount of snow on the ground. With how far behind I am, and with all the snow I may have to abort and try again in a couple of weeks. I will evaluate the situation in the morning. 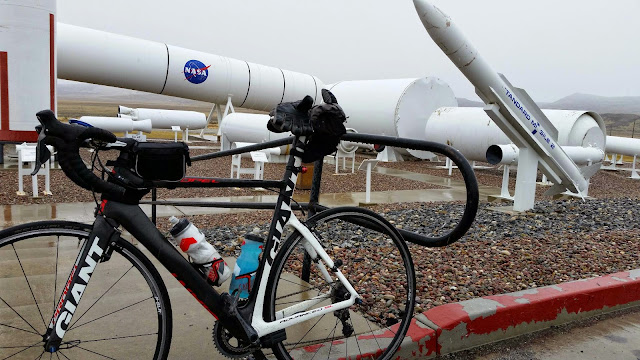 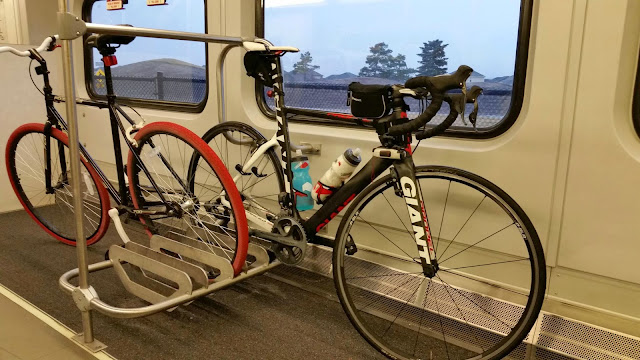 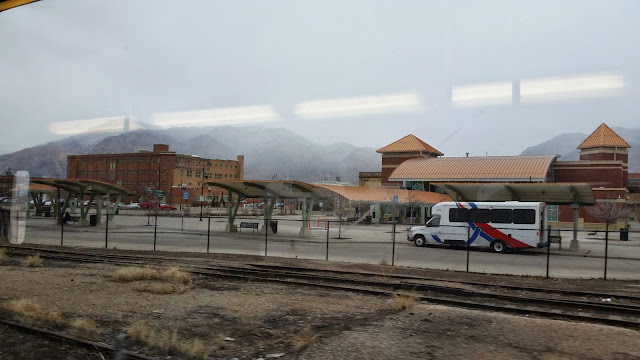 Posted by Dpburton at 8:45 PM No comments:

Goodbye Stranger, It's Been Nice

Every end is also a beginning.

After seven years of giving everything I could for my bike store, yesterday was the final day. It is hard to see something I worked so hard at come to an end.

I hope the bike shop was successful at its primary purpose, to help people improve their quality of life by getting them on a bike. I know biking can make a real difference, it can help you lose weight, lower cholesterol levels, and lower blood pressure.

Today is the end of the bike shop era, and hopefully the start of the bike riding era. But the objective remains the same, to help people improve their quality of life using a bike.

Tomorrow I start the Eagle Mountain to Newport ride, today I gather the gear needed.