9 April 2015 121.6 miles.
This was a great day. On Wednesday it was a cold and miserable headwind. My Achilles was killing me and my toes were freezing. So I stopped at the gas station in Riley to get some hand warmers to stick into my shoes, just as I was getting ready to leave a guy and his wife in a truck offered me a ride to Bend. I took it.

I found a nice room in Bend and spent some time getting the swelling ankle to heal.

This morning I got an early start and spent a nice day biking in the forest. This is SO much nicer than the high desert. The climb up to the first pass was a good climb but not as bad as I feared. Then the climb to tombstone pass seemed to go by sooner than I expected. Down from tombstone there was 6% grade for 11 miles, and even after that most of the day was spent going downhill sometimes a bit of a headwind. Still, I was able to get some great mileage in spite of the fact that I stopped and took a lot of pictures. I'll ad them to this post when I get better internet.

Posted by Dpburton at 8:06 AM No comments:

It burns us (says Golem)

70 miles
It was a good thing I got in extra miles yesterday while the biking was good. Today was mostly climbing and cold and cloudy. Given yesterday's miles I was able to quit early today. A big storm rolled in right behind me as I was going into Burns. Had I been aeven a few minutes later I would have gotten wet.

Instead I made it to Burns with only a few raindrops and have time to ice and soak my Achilles tendon which has gotten swollen and is very painful.

All day, it seems, I spent thinking that I was about to hit the top of the climb, and then I would go around the corner and the climb would continue.

I think I am on track to finish this Saturday. 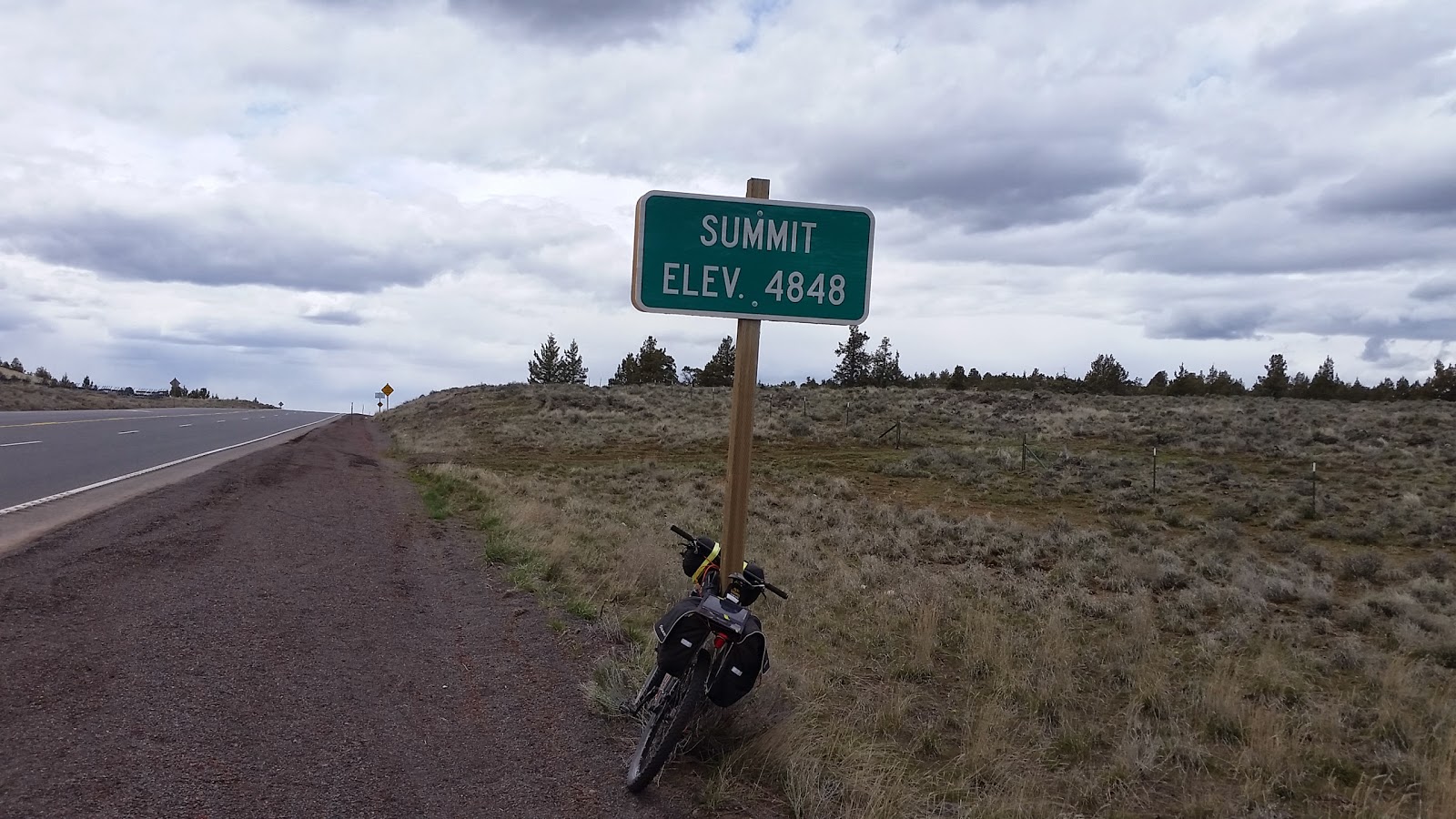 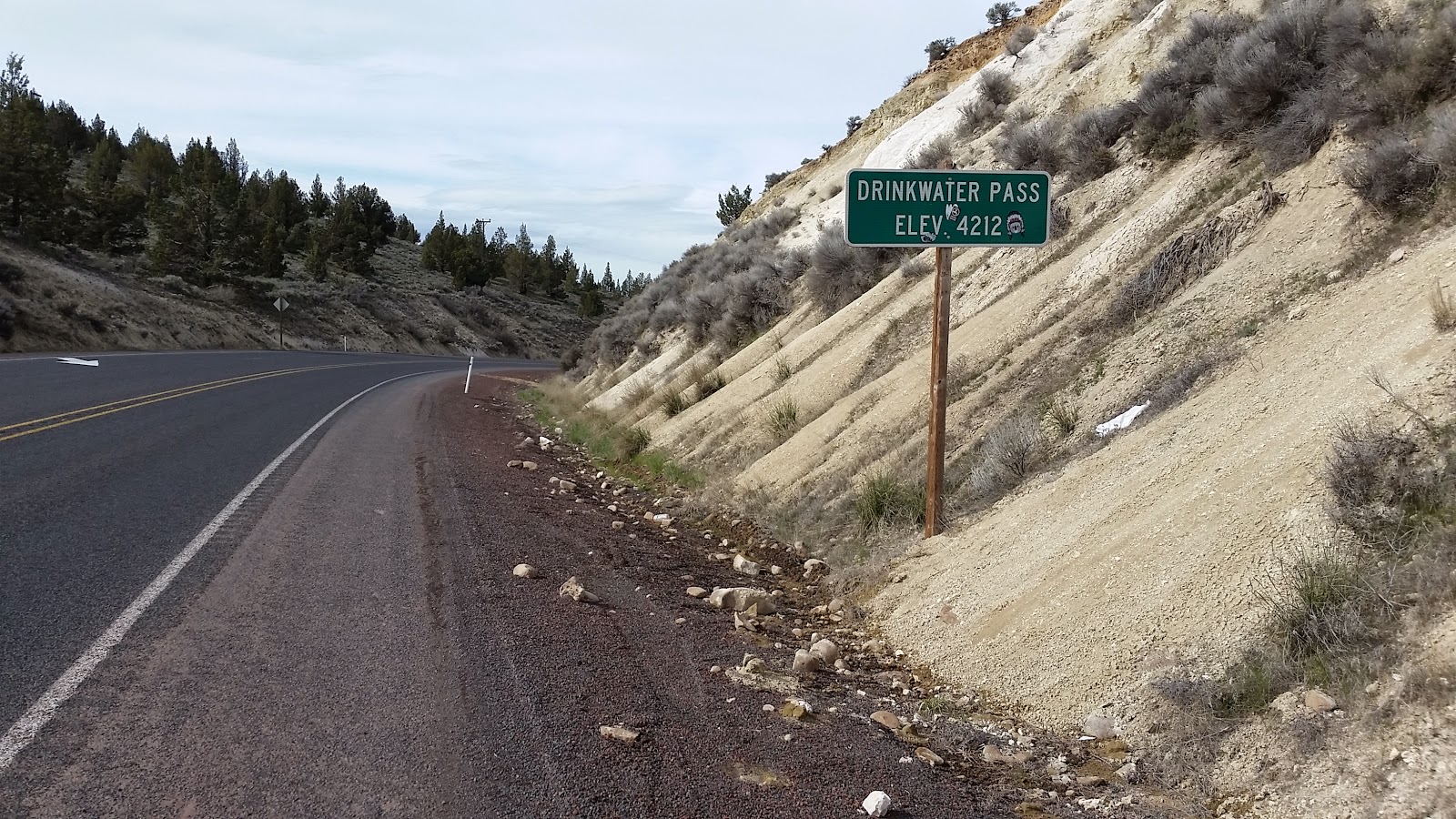 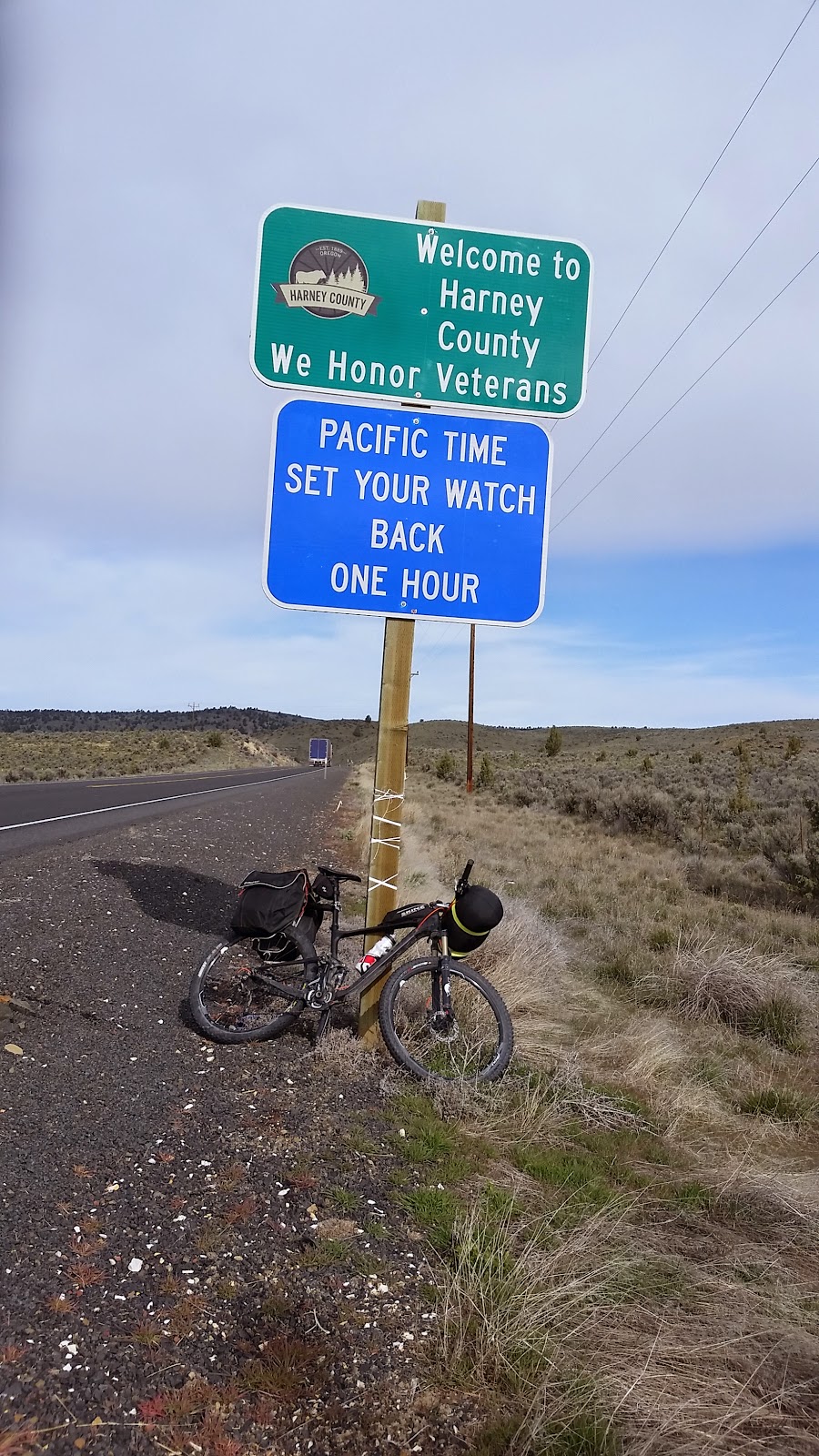 Posted by Dpburton at 8:14 PM No comments:

6 april 2015.
I finally made it to Oregon. I got 114 miles today which is the most in one day so far unless you count the train ride to Ogden.

The weather today was good and it seemed most of the day was downhill. Even going up this little river canyon felt like it was downhill. Looking at the GPS it says I climbed just a little more than I descended. I guess it is because I am going slightly south which means a bit of a tailwind.

Anyway I am feeling good and happy. My Achilles tendon is being very painful but other than that I am doing well.

GPS say 308 miles to go but based on what I remember from the Google maps I think I actually have about 370 miles when you count all the twists and turns. 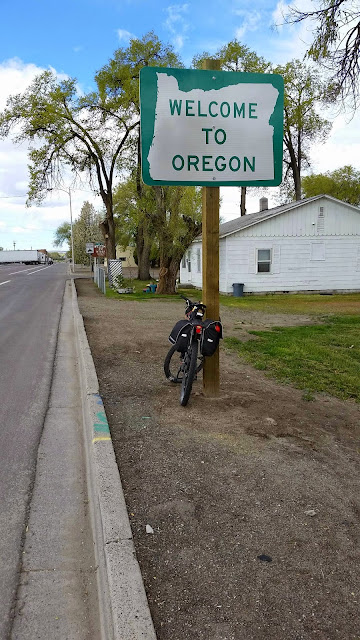 Posted by Dpburton at 8:00 PM No comments:

89.1 miles
It was a cloudy day. It started out being a calm day. I followed the old Oregon Trail as it climbed out of the Snake River canyon and onto the high open desert where there are big wind farms. That is a great place for a wind farm, and an aweful place to bike west.

The rest of the day was into a good headwind. By the time I made it to Mountain Home I decided to take the shortest route to Kuna where I plan on taking Sunday as a rest day.

Even taking the freeway, the shortest route, I ended up getting 89 mikes for the day. I was thinking the draft of hundreds of trucks headed west would pull me along. However there was just enough of a cross headwin wind reduced the effect from the trucks and i still had a good headwind.

I will take a rest day tomorrow and sleep and watch General Conference.
Posted by Dpburton at 10:11 PM No comments:

It was a good Good Friday. Even though it started with the temperature at 26F it wasn't very windy and eventually it warmed up.

I think my body is getting used to biking all day long, while I am still a bit sore it is getting better. 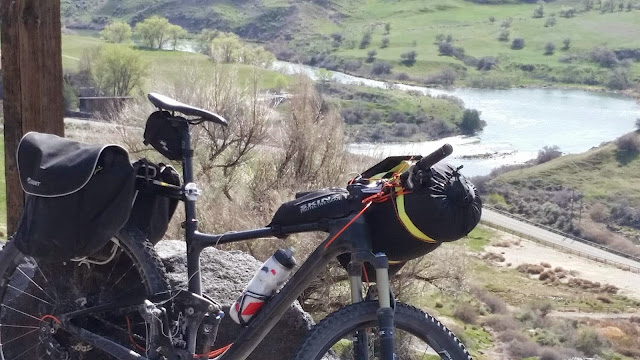 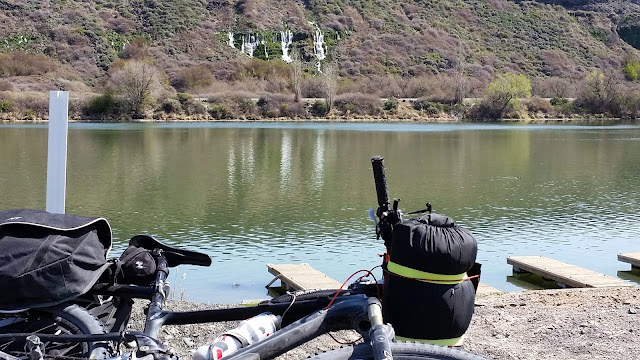 Posted by Dpburton at 9:50 PM No comments:

No cell phone coverage here, so this will get posted when I get back to some kind of civilization. Getting ready to eat some sweet and sour pork. As soon as I started heating the water the wind picked up. The tent Chanda gave me has a nice vestibule but the wind was blowing it into the stove so I had to work hard to keep the tent safe. As soon as I turned off the stove the wind died down.

Happy with today's mileage, but part of the joy of this is going with no real schedule, so I should be happy no matter what I get. 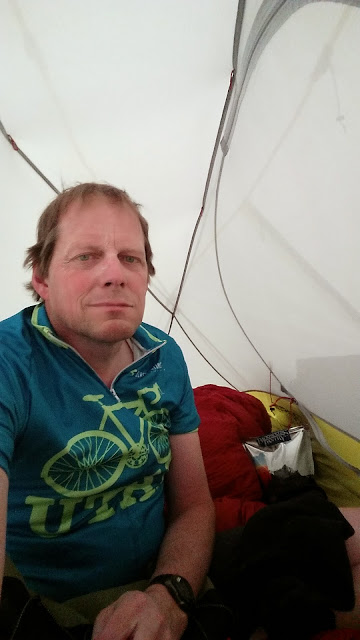 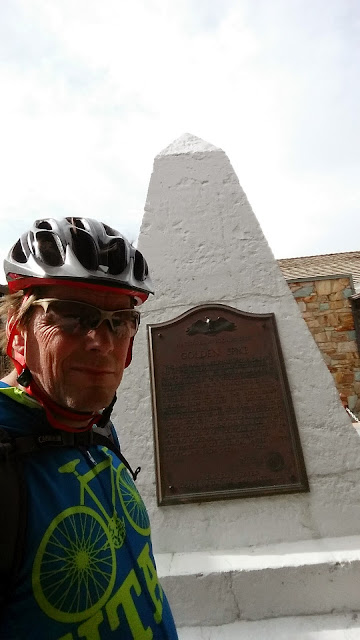 Posted by Dpburton at 9:49 PM No comments: 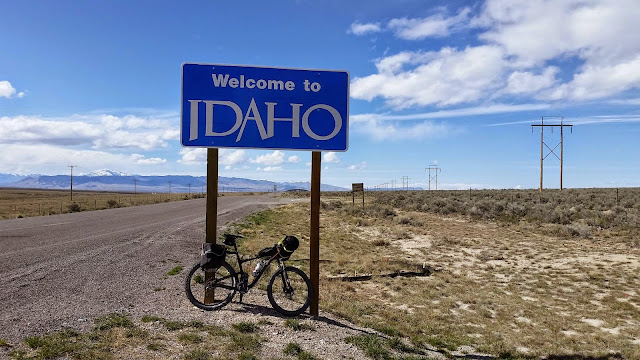 Posted by Dpburton at 2:32 PM No comments:

2 apr 15, 73 miles
I decided to stay in a motel in Twin Falls for the night. I was tired and sore so I just stopped at the first motel I came to. Big mistake.

I am thinking I want to alter my route to reduce the rough dirt roads. So I need internet access to be able to replan the route. Also it would be good to get these blog entries sent. The internet at this motel doesn't work.

Posted by Dpburton at 2:31 PM No comments: