Gooseberry mesa is always good for at least one good crash. The section called "God's Skateboard Park" is a maze of tight turns round trees and rocks and short steep climbs and drops. A lot of the trail is on large sections of red sandstone called slickrock. In these sections white dots are painted on the rock to mark the way to go. At one point I turned a corner around a rock, off to the left could be seen tracks in the dirt between a tree and rock on the right were dots headed straight up an eight foot high rock. A split second decision was required. I'm not sure what was the reason for the choice I made, it could have been that I was having a lot of fun challenging myself, or maybe I wanted my cousin, who was right behind me, to see how I could take on the best the trail had to offer. I took the trail to the right. Not knowing before hand what was coming my speed was a bit slow. I was able to get my front wheel just barely over the top edge of the rock when the momentum and traction ended. Grabbing both brakes and putting a foot down I was able to hold my position on the rock for a moment. Knowing this wouldn't last I let out a little yelp, "help"! My cousin rounded the corner just in time to see me loose the momentary gravity defying stance I was holding and fall back bike over body to the rocks below. Our first thoughts were the same only directed at different objects, he wanted to know if I was OK, I wanted to make sure my bike was OK. 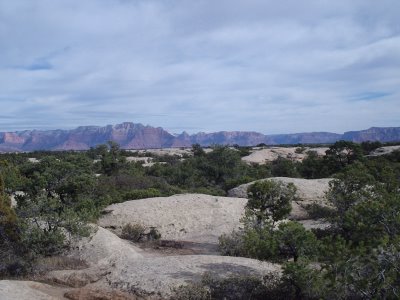 Now somehow there was a lesson of life in this. The lesson was quit clear this morning, but now I can't remember what it was.
Posted by Dpburton at 8:09 AM No comments: