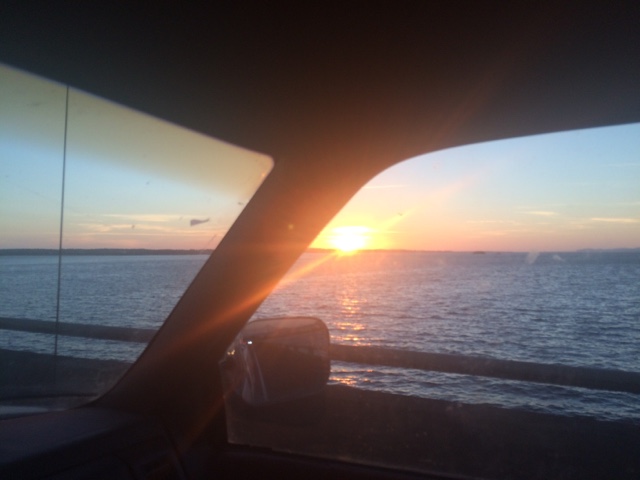 I woke up early this morning so that I could drive from Eagle Mountain Utah to Astoria Oregon where I will begin the my ride. There are so many fires in the western states that it was very smoky all the way until Portland. The final fire was in the wilamina area just outside of Portland. Finally after over 800 miles and 13 hours I was out of the smoke.
I don't know what it is about the Oregon coast range mountains. When I reached the Coast Range a smile so large, as Carissa would say, it was so large it would make me have to close my eyes. I think I Oregon just runs in my blood. I was born in Corvallis on the east side of the mountains, but it is more than that. George Luther Boone and Alphonzo (sp?) Boone, my great great something grand parent and father, were some of the original Trailblazers in Oregon and settled in Toledo. George's place is still known as Boone island to this day. They say you can't shake a tree without Boone relatives falling out. I know I have a lot of Boone relatives in this area.
I also have some Czech relatives in the area. In particular, Oswego Oregon. I don't know many of my relatives that live here in Oregon. However when my grandma Helen and grandpa Daniel Boone's ashes were sent out to sea I met my Czech relatives. They look just like my Grandma.
As I drove through the "rain forest" tears flowed as I remembered sending my grandparents off to their final resting place. But not just for them, but for my mother too. I remember her telling me how much she loved the Oregon rain forest. And when she needed peace she left Utah and moved to the Oregon coast. She was so anxious to move out here that she bought a house that seemed to be falling off the hill and into the ocean. The floor sloped more than any camping spot I have ever placed a tent. I am sure that some day that house will fall off the hill if it isn't torn down first. But my mom loved the house. She loved the forest and the beaches. She would often talk of Cannon Beach, and she loved to go down to Agate Beach to collect agates. I could rarely find an agate but she was a master of finding the agates and other rocks that would be great for polishing.
It is hard to imagine that heaven could be as lovely as the Oregon coast. But I am imagine that my mom's heaven is a lot like Oregon, and maybe her home in heaven seems as if it is about to fall into the ocean.
Posted by Dpburton at 11:43 PM