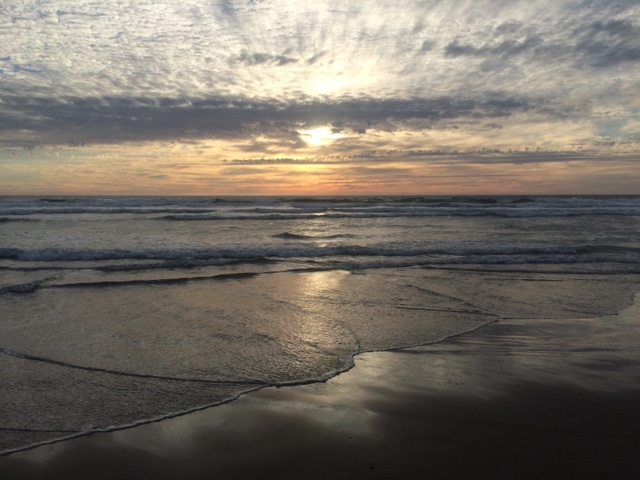 I had an incredible day of biking. I talked to a state park beach patrol guy before I headed out. After I left he figured out who I was. He then tracked me down on the beach. Kind of cool, a guy from New York, working on the Oregon coast and had heard about my South Pole expedition so we took some pictures at the north end of the park which my starting point for riding south. 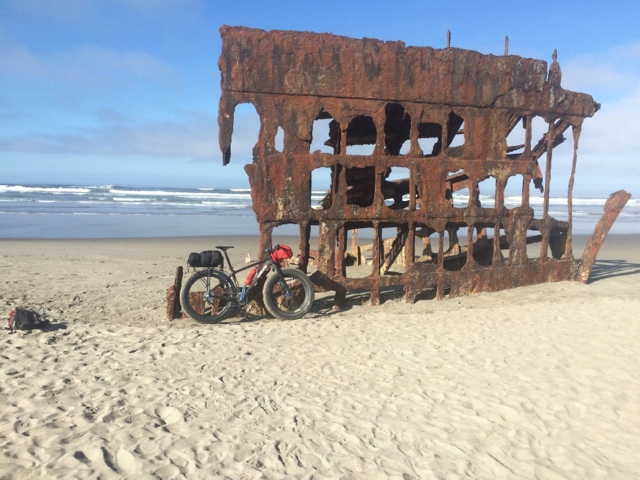 The beach riding was incredible. The beach is littered with dead jelly fish, crab legs and shells and sand dollars. The winds come off the ocean from the north west. So traveling south is generally fast and relatively easy.
First obstacle? A military range. They were going to be firing something so they had check points at the north and south ends of the firing range. I was told I could go through, but no stopping and get through fast so you don't get shot. I guess I'm still alive so it must have worked. 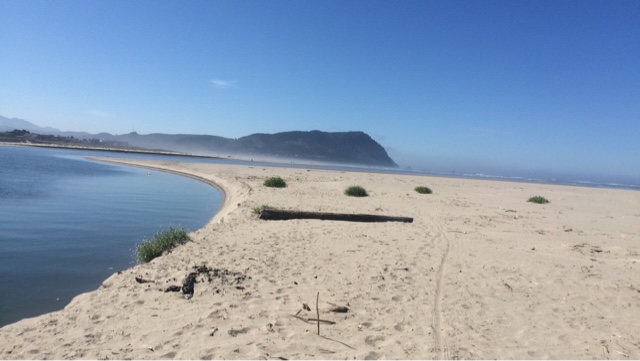 After about 17 miles, at Seaside, there is a river that enters the ocean. The Oregon coast trail map says to get off the beach and explains how to get around the river. I missed the exit.
When I got to the river there was a nice sand bar with seagulls wandering around. The water between didn't look too deep. Can I get to the island and then to the other side? The beach patrol guy thought it might be possible. I headed out into the river. A nice splash splash rhythm followed. Fun, but now my feet are wet and I probably got salty water into the bottom bracket. Arriving on the island and assessing the situation. Yeah, I probably could wade across, but I would be very wet and I would have to float the bike. Finally my senses kick in and I retrace the route back towards the exit I was suppose to take. But wait, a path goes through the weeds up there. It turned out to be a great fun shortcut.
Back to the beach for a few miles. Again the map says to leave the beach, but this time it goes on a trail over the point. Cool! I climb the hill to the Ecola? state park and find the trailhead. There is a sign there that has a hiker, a horse rider, and a bike. A faint line goes through the horse and bike. I think two options, bikes are not allowed or it looks like it could be the work of a vandal I pick the second interpretation. The trail is steep, has a lot of root step ups and is nasty for a bike. I meat people that say, all the other bikers give up and turn around. I'm not that smart and keep going. It is a hard climb to work a bike up. A lot of dead fall on the trail makes it even worse. Finally I get to the top. Yes it levels out for a couple of miles, and a mountain bike that is not loaded with gear could ride it, that is assuming the rider isn't hammered from getting up the trail. So after 4 miles of nasty hike a bike I finally get to the hikers camp, and a narrow service road that goes to the trailhead at the south end. I jump on the road. Fast fun downhill in a rainforest. Awesome. Looking back there is a third possibility for the sign. Some biker made the line to warn other bikers that it isn't worth it. 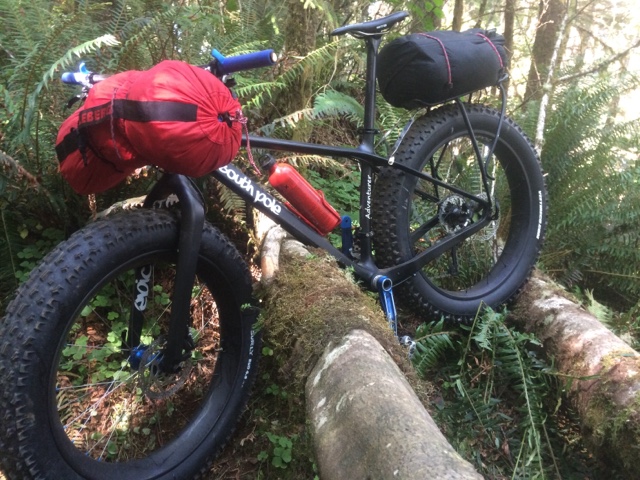 At the bottom the trail continues on. This trail does not say anything about bikes and it looks decent. I start on it. It may have been rideable but I'm beat up from the last trail and running low on water so I turn around and use the road to get back to the beach. A lot of climbing on that road for a beat up cyclist.
Some more great beach riding. The map says that you need a low tide to get around the next point. It is about mid tide and rising, but a hiker says that it is doable, and it was.  At one point Oregon cut through some of the rocks to make it possible to travel down the beach. I guess this was before highway 101. It is kind of a cool little passage followed by some caves and se areas where the water was surging into the rocks. If I times it well I could go between waves and work my way through the rocks and sand. Next is arch way point. The map says to leave the beach here. I go through the arch, and down the beach until I get to falcon point area. Here there is no way to continue on the beach and I have to climb up a steep trail to get to the road. Then the road goes very steep up to 101.
The climb up to the top of falcon point was hard and near the top I drank a Coke. It don't even freeze while I was opening it.
The road down to Nahem? Beach, sorry no internet connection here to get the right spelling, is steep and fast. I passed the of road trails for the Oregon coast route. Again not designed for biking. Going down the road I hit the highest speeds I think I have ever done in a fat bike. This flatish tires don't handle well at those speeds.
I got to the hiker biker camp just as it was getting dark. It was a great day. However it is a lot different than I hoped. I have come to the conclusion that you need to think of this as a beach and road ride, not the beach and mountain biking trip I was thinking of. So I think I should get back to the truck so I can get the trailer sold as soon as possible. The experiment is done time to be a little responsible.
Posted by Dpburton at 9:03 AM