Yesterday's ride to work was a mix of hot and cold. I left my Louis Garneau Vulcano gloves in the store and so I had to wear some walmart gloves. So my fingers were freezing. When I got to the Silver Lake subdivision I decided to try and come the rest of the way on the old rail road bed. Climbing an icy hill is a great technical challenge and very strenuous. So now my core is overheated but my fingers are still frozen. 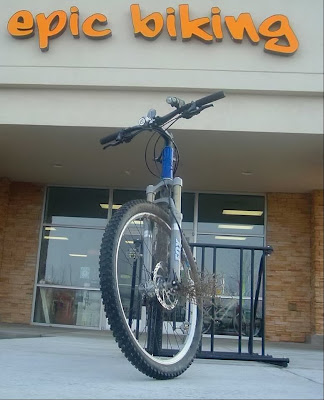 Taking the train bed was a great choice. Trying to power through snow drifts, keeping speed up so you don't break through the ice, and keeping balance through tire ruts makes what would be an easy ride a real challenge.

I started to get lazy and ride on the side of the hill to avoid snow drifts. Then I came to a patch of tumble weeds and a snow bank. I wimped out and went through the tumble weeds, and carried a good sized one the rest of the way to the store.

I should have dropped off the train bed early but instead continued through Coyote Creek Ranch. The problem there is they have this quagmire of mud and horse manure that I have to go through. Thinking it was frozen I tried to ride on the frozen, um... stuff, it didn't work, I broke through the ice and coated my tires in the stuff. Then comes a nice downhill that flings all of the stuff off the tires. Well anyway today I made the wiser choice not to go through Coyote Creek and now my bike doesn't smell like the name of the Kona bike that is in the repair stand, "stinky".
Posted by Dpburton at 9:54 AM