After it snowed the other day my son wanted to build an igloo. I don't know how to make a good igloo but I do know how to make snow caves. This was probably the best snow cave I have ever made. I got out the snow shovel and piled up the snow until it was about six feet high. We then dug out the cave. Because the snow was so soft this was an easy cave to dig out. After a few days in the sun the cave was about half as high as it was originally but still an intact cave. 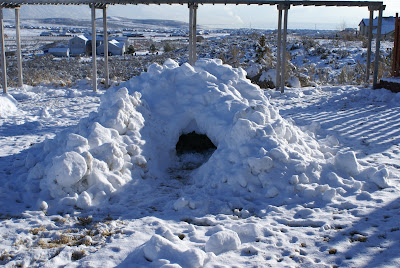 It has now been a week since we built the snow cave and my back is finally getting over the sore muscles from lifting all that snow. It was probably the best core muscle workout I have ever done.

I posted another picture from the snow cave on flickr.
Posted by Dpburton at 9:48 PM