We went up Slate Canyon today. It has been a while since we have been up Slate Canyon, so it was kind of like visiting an old friend. Someone had been up Slate Canyon on their motorcycle and messed the trail up a bit. I ended up getting off track on my first attempt to climb the hill after the gate, and had to retry it. But then I was able to make it all the way above the pipe hill without stopping for the first time. By the time I got to the top of the hill I felt sick from pushing to hard, and had to sit down and recover. 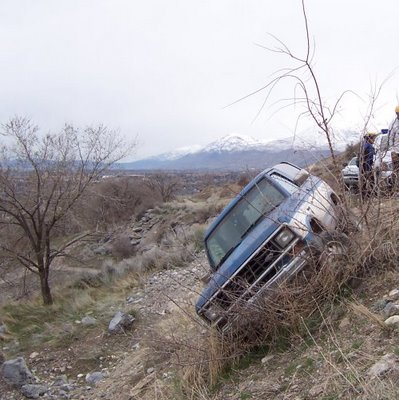 This picture is from a couple of weeks ago. It goes to show how stupid people can be when they have been drinking. The truck looked like if you breathed on it wrong it would roll down the hill. The stupid thing is there was no reason we could see for having gone off the road onto the hill like that except the can of beer that had fallen out of the truck when they opened the door. Also it appears that they got out of the truck on the down hill side, as there were cigarettes, beer and other things that had fallen out when the door opened. They were extremely lucky the truck didn't roll over them on the way out.
Posted by Dpburton at 8:26 AM