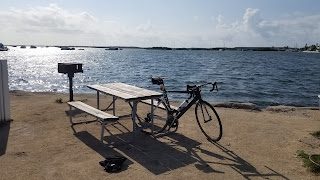 I'm ready to get moving. Kendall was feeling too tired to bike today, so we are taking our rest day today and will go back to Marathon tomorrow.
The sun is intense. Sitting in the shade neat the pool today and just the reflection of the sun off the water felt like it was sunburning me.
So we are going to get going in the morning as soon as it is light enough to see and hope to skip out on the hot afternoon.

Forecast for the night calls for rain, so I guess I better put up the rain fly. Might still be raining when we start in the morning.
Posted by Dpburton at 6:57 PM No comments: 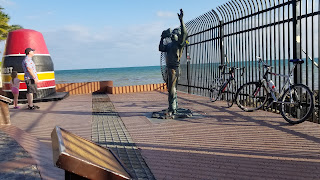 I guess having him use my cheap Trek mountain bike that I bought to pull the baby trailer with was a mistake.
Posted by Dpburton at 8:21 PM No comments:

Yesterday we got a cheap motel in Homestead. For 50 some odd dollars it wasn't bad, and the breakfast in the morning was great. Then drive to Key Largo for our starting point.

OK, what is the deal with the drivers here! Every time one lane was dropping out some idiot would think they need to sneak around at the last second. And when it is a big truck that means they are going to push you off into the mangroves. I guess it just fits in with the Florida thing of thinking they are stock car drivers and need to draft a few inches off your bumper.

But even though I'm going to leave a reasonable amount of space between me and the car in front of me, I'm aware of what is going on and I'm not going to let you force me off the road.

See we got to the chamber of commerce building a bit before it opens. Fortunately the lady running it also got there early. She says she has to leave early because frequently there is an accident from people getting forced off the road when the lanes merge.

In Key Largo the bike route is a nice path along the side of the road. But there are a lot of places south of Key Largo where the trail is all broken up and not ridable on a road bike. And if you are dumb to ride it anyway then you'll be fixing a flat. :-)

Anyway it was a fun ride with amazing scenery and more iguanas than I've ever seen. OK, I'm not sure I've ever seen iguanas in the wild before, but I promise there are a lot and some of them are practically the size of an alligator. OK, OK, I yet to see an alligator in Florida, but they are big iguanas.

So tonight we are staying with some hosts we arranged through couch surfing. They have been the best. They even claim they like the vegetation version if Thai curry I made for them.

So get some sleep tonight and head out to Key West tomorrow.
Posted by Dpburton at 8:39 PM No comments:

So, my friend Kendall, flew into Orlando this morning. His flight was delayed, probably die to all the issues with the 737 Max planes being grounded. So by the time we hit home it was about 4 am.
Today we did our final packing and then drove down to Homestead Florida. Key Largo is just a few miles from here. The plan is to bike from Key Largo to Marathon tomorrow, and then stay with some people we found through couch surfing. This is our first time trying out couch surfing. We tried getting other hosts in Key West and in Marathon for the return trip but so far have not been successful.
This is a trip that Kendall suggested way back before I decided I want to move to Florida. Before this trip my biking in Florida has consisted of the local bike paths and roads near Clermont.
Video of biking most prominent point in Florida: https://youtu.be/UN4D0T6bTdo

Posted by Dpburton at 8:41 PM No comments:

We went back to SeaWorld again today. My grandson just had such a blast at Sesame Street last time, we had to come back and do it again with his mom and dad. So we spent about half a day doing Sesame Street and the Orca show, and then spent the last half of the day doing the roller coasters, and water rides.

We got drenched watching the Orcas and so then went to the splash pad and rinsed off the salt water. And then went and rode the Infinity Falls. It is a pretty good water rapids fall, not too long and the last drop that seems like it will be pretty intense, isn't as bad as it looks.

I'm not a big roller coaster guy, but we had a blast doing the coasters at SeaWorld. The Mako coaster was the biggest coaster I've been on. I think half the time I was floating out of my seat. Then we did the Manta coaster. My daughter did NOT want to do that a second time. You are essentially riding the whole thing laying on your stomach. The first drop was terrifying and they take your picture at the bottom, but then as you head back up and around the next loop... yeah well it just gets even more terrifying. Finally we did the Kraken which is more rickety than the others and has a lot of loops. It really is a good set of roller coasters, and the lines were only like 5 to 10 minute waits. After Kraken we did the Atlantis ride which is something of a combo water ride and boat ride. Kinda cool.

We tried out the all day dining plan for one of us. It worked out good, and was enough food to share with the rest of us. I also bought their refillable drink cup. Usually I count on these park trips as a way to get some exercise in while not eating much because I don't want to pay the prices they charge for the food, but I think today I ate more calories than I burned.
Posted by Dpburton at 9:46 PM No comments: