Some Day I am Going to Be Brave

I always seem to time my visit to the grocery store just right. I round the corner of the isle just as the guy is starting to stock the chips. He throws the boxes of chips around like a disgruntled postal worker. Then pulls the bags of chips out of the box and stuffs them onto the shelf like a lady on vacation trying to fit too many clothes into her suitcase.

Some day I am going to be brave and say, "STOP IT!" and show him how boxes can be handled with care, gently placing the box full of precious tortilla chips on the floor, then how to delicately take a bag of chips and gently place them on the shelf and thus preserve the nice big round chips that are perfect for dipping into salsa.

Yeah some day I will be brave, meanwhile I will just complain about it on Facebook, and try to figure out how to get salsa onto the bag full of tiny crumbs I just bought.
Posted by Dpburton at 8:08 AM No comments:

Eagle Mountain to Newport: The Route

I will need to go 160 to 170 miles each day to make this trip work. Conveniently there are cities with motels located at correct distances for each day's travel. So right now I am thinking that my route and stops will be:

Bike down to the Frontrunner station in Lehi
Take the train to Ogden, then bike to Burley Idaho

Day 3
Kuna Idaho to Burns Oregon mostly along US 20

Day 4
Continue on US 20 to Sisters Oregon

Day 5 - The scary day
From Sisters up and over a narrow twisty US 20 to Corvallis (where I was born), and then down to Newport.
Posted by Dpburton at 7:39 AM No comments:

I am really looking forward to next week. January and February have been overwhelmingly busy at the store as I liquidate my inventory. With no employees, and my son gone on a mission, it is everything I can do to keep up. Unfortunately I have hardly even ridden my bike the past two months as I try to get everything done.

So this Saturday will be my last day for the bike shop and then I will ride off into the sunrise. Working on the route from Eagle Mountain to Newport, it is going to be about 900 miles. I only have a 5 day window to make this work, and so I am going to cheat a little. I will ride down to the Frontrunner train station and then take the train up to Ogden, and then ride the remaining 800+ miles in 5 days. 160+ miles a day, which seems like a lot for me especially given how little I have ridden so far this year. 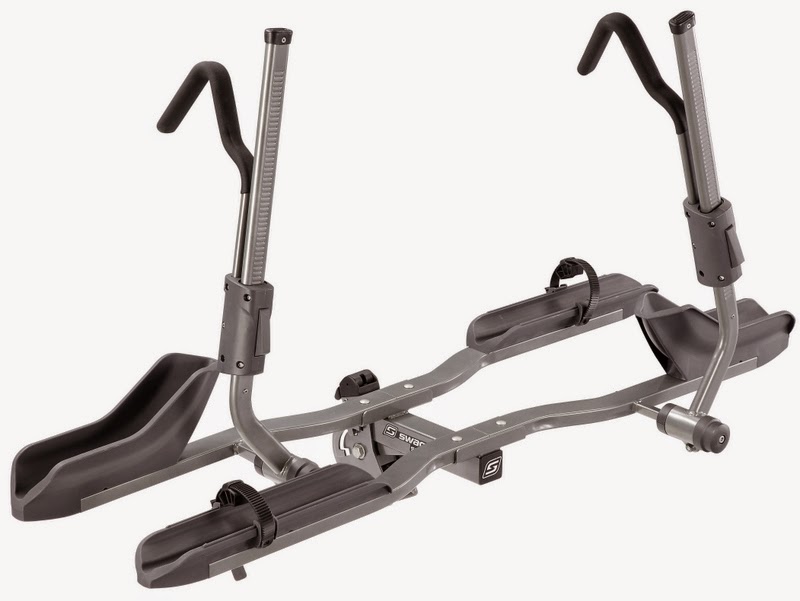 After getting to Newport I then need to be able to get the bike back home. There is no way that a bike will fit inside a Miata, and no way to put it into the trunk. I need a bike rack. But of course I can't cary the bike rack with me on my bike.

Swagman to the rescue! I contacted Swagman and they will be sending a Semi 2.0 to Newport.
Posted by Dpburton at 6:41 AM 1 comment:

Change in plan, which has determined the bike and maybe the route. I have to be in Boise next Saturday, and then back in Eagle Mountain to do a presentation on Monday. I also have a presentation that I will be delivering to the URTA in St George on the 17th.

So to make the schedule work I will leave early Monday morning and go nearly 900 miles in 5 days, which means I will use the fastest lightest bike I have and stay in motels so that I don't need a tent and camping gear. I would have preferred to do it camping because of cost and just for the fun of it, but I figure it would be too hard to go 180 miles a day and camp.

Now back to route planning. Google was showing me what I thought would be a good biking route, but now for some reason it is no longer giving that route as a biking option.

Posted by Dpburton at 4:55 AM No comments:

I now know what my first post bike shop adventure will be.

After opening my bike store I had to sell my Miata so that we could survive through the winter. I told the buyer that when she was ready to sell it she needed to give me the first option to buy it back.  A couple of days ago we got the call. She is getting a new Miata.

So my first bike adventure will be going to Newport Oregon to get my old Miata.

My nephew is getting baptized in Boise on the 7th. My wife suggested that I could ride with them to Boise and start my bike adventure from there. However after talking with the rest of the family they decided that there is not enough room in the car for everyone. Guess who was voted odd man out. Yup, I now get to do the full distance with my family's blessings.

Now to decide on the bike:

I just love to ride my bike.
Posted by Dpburton at 1:29 AM No comments:

Two more weeks before I close my store. It has been very difficult since I announced that I am closing my store. With everybody coming in to get the great deals as I sell off my inventory I have been extremely busy trying to keep up. To make matters worse I am doing it alone, since my son is on his mission and I don't have any employees.

The sad thing about this is that I am having such a hard time keeping up with the store that there is no time to ride. So as sad as it is to be shutting down the store it will be nice when it is over and I can get some riding in.

The plan is to make riding my bike my full time job. I am working on getting companies to sponsor me as I continue my efforts to get more people out riding bikes. I have a incredible year of bike adventures planned for 2015, and then an even more amazing plan for 2016.

Continental Divide
I have applied to be a brand ambassador for Blackburn. If I get that position than I will be riding the Great Divide trail from Banff Canada to the bottom of New Mexico. In addition to this trail I have the following adventures on my list for 2015:

White Rim Trail 3 day adventure
The Colorado Plateau is a rugged land, a land of contrasts--unbroken expanses of rock, towering monoliths, great rivers, scorching canyon bottoms and icy mountain peaks.  At the heart of the Plateau is a mile-high maze of canyons, mesas and spires carved by the Green and Colorado rivers--Canyonlands National Park, Utah.
The White Rim Trail wanders through this high-desert land of rock as far as the eye can see. The White Rim Adventure will provide ample opportunity for spectacular photography.
White Rim one night adventure
Many people ride the White Rim route in one day. While I was training for my South Pole Expedition, time constraints meant that I could only ride this trail at night. This has become an annual tradition and for the last two years I have been doing the White Rim trail with an increasing number of riders as a one night ride.
Kokopelli 3 day adventure
The Kokopelli Trail is a 142 mile (229 km) multi-use trail in the U.S. states of Colorado and Utah. The trail was named in honor of its mythic muse, Kokopelli.
The Kokopelli Trail begins near Loma, Colorado in McInnis Canyons National Conservation Area. The trail follows Mary's Loop through the Mack Ridge mountain biking area before crossing Salt Creek and entering Rabbit Valley. From Rabbit Valley, the trail winds south, roughly following the Colorado River until it crosses Utah State Route 128. There it begins the uphill section, eventually looping around the La Sal Mountains, then descending into Moab, Utah, via the Porcupine Rim Trail.
Great Western Trail
The Great Western Trail is a unique corridor of braided and paralleling trails. The trail system traverses 4,455 miles through Arizona, Utah, Idaho, Wyoming, and Montana. It incorporates stunning desert and canyon landscapes, plateaus, woodlands, dense forests and alpine meadows. It links 18 National Forests, Indian, State and BLM lands and encompasses the most diverse vegetation, topography and wildlife in the western United States.
The Great Western Trail is really more of a network of trails, making it possible to create several spectacular loops. I will be doing three different loops on the Great Western trail system:
Northern Utah 3 day adventure
Central Utah 3 day adventure
Southern Utah 3 day adventure
The Arizona Trail two week adventure
The Arizona Trail is an 800+ mile recreation trail from Mexico to Utah that connects mountain ranges, canyons, deserts, forests, wilderness areas, historic sites, trail systems, points of interest, communities, and people.
Uinta mountains in Utah one week adventure
The Uinta Mountains are considered by many to be Utah's backpacking and hiking paradise.
The High Uintas Wilderness area is off limits to bikes. However there is a network of dirt roads and trails surrounding the Wilderness Area.
My Uintas expedition will use these trails to ride around the Wilderness area.
Yellowstone (road bike) one week adventure
It's a Wonderland. Old Faithful and the majority of the world's geysers are preserved here. They are the main reason the park was established in 1872 as America's first national park—an idea that spread worldwide. A mountain wildland, home to grizzly bears, wolves, and herds of bison and elk, the park is the core of one of the last, nearly intact, natural ecosystems in the Earth’s temperate zone.
Yellowstone does not allow mountain biking, so for this adventure I will be riding on the roads.
Idaho Hot Springs trail 500 miles 6 day adventure
The Idaho Hot Springs Mountain Bike Route guides riders over and through the breathtaking landscape of central Idaho. From blue ribbon trout streams to sub-alpine terrain and cozy mountain towns, riders will pass through some of the most spectacular country the West has to offer, with the opportunity to indulge in the highest concentration of soakable hot springs in North America.
Winter Biking mini adventures


Assuming I don’t find my way back to Antarctica, November, December, and January will be filled with snow biking adventures in the Wasatch Mountains of Utah.

It is really cool to meet really cool people from all around the world, even if it is just on the internet.

Sometimes I just wake up too early. Today was one of those days. I woke up around 3 am and couldn't sleep. So I decided to see if I could get a little work done on the computer. That is when Jose Mijares messaged me.

Jose Mijares and Gloria Pamplona are the owners of Artico Ice Bar. Every year they build a new bar out of Arctic ice. I have added this to my list of cool places to visit.

It is so wonderful to see people that have made their dreams come true.

I just love to ride my bike.
Posted by Dpburton at 8:39 AM No comments: