My brother-in-law said he read about the ranger truck getting stuck. I guess if people are actually going to read this blog then I better tell the rest of the story.

During the first week of April we were planning on riding the White Rim again. The plan was to do it as a three day trip but because of a death in the family some of the bikers would need to finish in two days. So we decided I would go out with the two day group and then drive the sag wagon back to the camp and go out with the remaining group the third day. The first day three of us got to camp about 2 hours before the other riders and the truck. It was a cold wet and WINDY day. At one point we were hit by a gust that must have been over 60 mph. It was so strong that it was nearly impossible to stand in. Anyway since we were at camp before the truck we didn't have anything warm to wear. With the wind and rain it was just too cold so a couple of us took shelter in the outhouse. It was quite embarrassing when we heard a couple of voices coming towards the outhouse. This guy and his girl-friend from England thought it was quite funny to see two men exiting the outhouse together. He took a picture of us standing there while his girl-friend was in the "loo". I'm worried it is out here on the internet somewhere.

The second day we were suppose to have the fast group go to Potato Bottom camp ground, drop all of the stuff the rest of the group would need there then continue out. But our sag driver got a bit behind us and in his panic to catch up with us went flying past and didn't hear us yelling or see us jumping up and down. So then we had to race to try and catch him. I guess you had to be there but it was quite funny and we had a good laugh at the "old geezer". He had what he called an "old geezer" pass that he had lost earlier and so we had good time joking about the being and "old geezer" and loosing the old geezer pass. 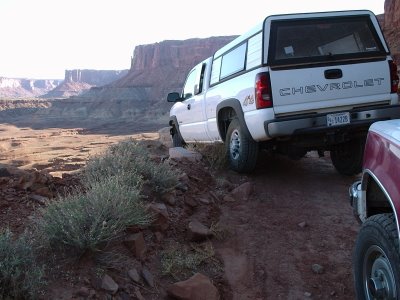 OK now the part you have been waiting for. When I got back to camp this ranger drives up and starts to talk to us. I don't have much experience with drinking so did not recognize that he seemed drunk, but the others did. However as he backed out of the campground and had a hard time getting on the road it was quite obvious he was in no condition to drive. But it was to late to do anything about it, and he headed up Hardscrabble hill. As you can see in the pictures the road is barely wide enough for one truck, with cliffs of the side. I was scared that he was going to go off the road and kill himself. 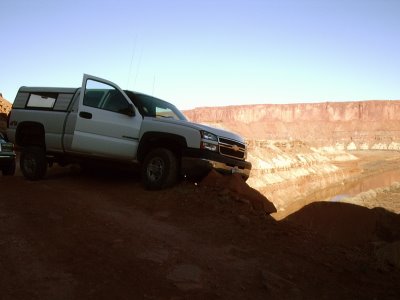 The next morning he comes walking into camp asking if we had a rope that we could use to pull him back onto the road. We didn't, however even if we had I don't think there is any way we could have got his truck back on the road. So I was sitting there waiting for a tow truck to come and get him so I could get past. After awhile I asked him if it was against the law to widen the road. He said it would be OK so I started digging the road wider. Then another truck came along and they helped me dig. This was fortunate because when I finally got it almost wide enough to get past and made the attempt I ended up almost rolling my truck. Luckily the other guy jumped on the front corner of the truck to keep me from rolling. I sat there for a couple of minutes trying to figure out the best way out of this. I could just see doing it wrong, my truck rolls over, smashes my bike, hits the rangers truck and sends it a thousand feet down the cliff and into the river below.
Posted by Dpburton at 10:03 PM