Yesterday as we were coming to the top of the first hill everyone stopped to wait for everyone to catch-up. When it came time to start I started out first because I like to go at max speed down the hill and then up the next and didn't want to run into anyone. However as I started Layne started right behind me and threatened to be right on my tail. So I put it in the highest gear and bombed down at max speed and push hard up the next hill. When I got to the top Layne said "beep beep" to let me know I wasn't able to drop him. So as we started down the next hill I kept my speed as fast as I dared, however there are some curves in this hill. As I rounded the curve I was going too fast to feel good about the traction and swung a bit wide. Off to the side of the road was a nice backpack sized rock. You guessed it, I hit it straight on! Flying off the bike I am fortunate enough to land in a tree and not on the rocks. Of course Layne was right behind me as I endoed off the rock. He started to laugh then I could tell he was worried that it might not be a laughing matter and tried to hold the laugh back. 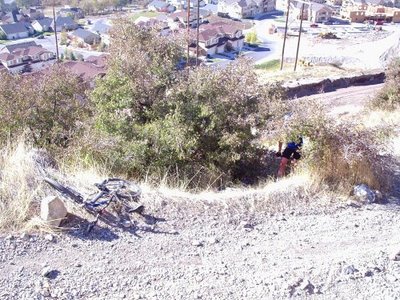 Here is a reenactment of where my bike was and where I landed. It turned out that even though I had flown 15 feet in the air and landed in a tree, all I got was a couple of minor scratches.

Thought: No matter how much pressure you feel from behind, don't go so fast that you can't keep control: You may end up breaking your neck.
Posted by Dpburton at 6:05 PM